The Tradition and Origin of Graduation Flower

sghamper
Jul 14, 2020 graduation Comments Off on The Tradition and Origin of Graduation Flower 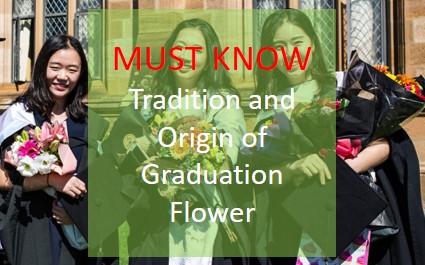 Sending flowers has been a tradition since ancient times. It is a way of expressing feelings and showing emotion that no other way can. It started in ancient Egypt where beautiful bounties of flowers were given by people to their loved ones and even enemies. It has been customary up until the Middle ages where flowers were given their own meaning and symbolism. During Victorian times, people were not used to expressing their emotions outwardly, hence, using the giving of flowers, they were able to tell what they feel either with love or hatred.

On the other hand, graduation ceremonies started during the 12th Century by the first universities in Europe. There were already several degrees at that time including Bachelor’s and Master’s. The graduation gowns worn today were actually the same gowns used on the first graduation ceremony in history. Its design was inspired by the dress worn every day by the university staff during the Middle Age.

Since that time, graduates were given gifts by family and friends to express their love and appreciation. Since flower propagation was still not popular at that time, people learned how to make silk flowers. The Italians have mastered the art of creating silk from silkworm cocoons in the 1100s and they have created several patterns that were used as petals. These silk petals were then tied together to form a rose-like silk flower. This was usually given to graduates as it did not require much value to create.

During the Medieval times, popular flowers including foxgloves, daisies, cowslips, irises, Lady’s Mantle’s, marigolds, and nasturtiums dotted the plains and forests of Europe. They even used some of these flowers as part of their cuisines to add flavor and color to the food. Each of these flowers was given meaning and symbolism and have different uses. Lilies are often seen in religious medieval paintings. Nasturtium and primroses are often used in salads but can also be found in church decorations.

These flowers were also offered to graduates but not in an elaborate arrangement as what we usually see today. Tying them up using twines already did the trick back then. Sometimes, they also put the flowers inside a basket and offer them to graduates to show honor. They consider flowers as a harvest and giving it means offering respect and appreciation. Bouquets during the Medieval times are very simple and straightforward. It was only in the 18th Century where elaborate arrangements were applied by florists.

Boutonnieres are often given to graduates and are pinned to their gowns, especially to males. It is actually a French word that means “buttonhole flower”. During the 16th century, boutonnieres where popular as they are believed to ward off bad luck and evil spirits. This is probably the reason why they are worn during graduation to bring good luck to the graduates. When the 18th century came in, boutonnieres had a different meaning. From a lucky charm, they were considered as fashion accessories. Soon, the French people have adapted this in their style.

A century after, they were worn during the Romantic Movement to add a hint of color in their style. Up until this day, boutonnieres are worn to add a sense of elegance in their wardrobe. Men usually wear the same color with the corsage of their partners at prom and the same color with the motif of a wedding. At graduation ceremonies, they are worn to show honor to male and female graduates as a sign of their achievement and accomplishment. There are different flowers to choose from for boutonnieres including roses, lilies, tulips, and even greeneries.

Flowers are indeed a great part of history. Since the inception of graduation ceremonies, they have already been part not only as a gift to be given but as decoration to houses, churches, public halls, and stages. In early times, there were not so many decorative pieces that can be used to decorate stages. Flowers were a perfect alternative as they show elegance and add color and style to the stage.

Hawaiian leis are also perfect to be given during graduation ceremonies as they express love, appreciation, and good luck. Leis originated in 750 B.C., where the Polynesians used to tie flowers in a string and were worn as fashion staples during that time. They were also used to welcome guests as they arrive in the Hawaiian Islands. Leis are not only made out of flowers but also materials like shells, feathers, and Walrus bones. Ancient Polynesians fill their bodies with different leis. As a matter of fact, leis were once worn to depict someone’s rank in the society. They are a huge part of the Hawaiian culture and because it was considered as a melting pot if different cultures, other countries have adapted lei for their own.

Sunflowers are also a great flower to use as part of the graduation bouquet. It originated in North America where it was a common crop of the Native Indians tribes. They actually got domesticated first before corn crops. It was not only used as a decorative material but as a source of food. In the 1500s, the sunflower was taken to Europe by Spanish wanderers that explains why it is also abundant in the continent. As a matter of fact, they were the first nation to apply a patent for squeezing oil out of sunflower seeds. The patent was approved in 1716.

Receiving flowers for graduation gift is not just about the honor itself. All the contents of that bouquet have a deep history. This history is the reason why we are enjoying these beautiful blooms today. That’s why if you will ever receive a flower bouquet, know that it came from and was passed on by different generations – proving that bouquets must never be taken for granted. To the graduate, it serves as an appreciation of their tireless efforts during their academic years. For the coming generations, it will be propagated even more and passed on forward.